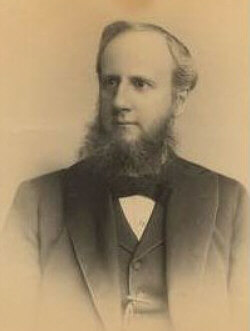 Background and Training
Duhring was born in Philadelphia to Henry Duhring, a merchant who emigrated Germany and Julia Oberteuffer, who came from Switzerland. His father became a prosperous woolen and lace merchant, affording his children the proper upbringing and private schooling. Duhring attended the University of Pennsylvania, graduated with an M.D. degree in 1867 and then took a two-year internship at the Philadelphia Hospital.

Between 1868 and 1870, Duhring was fortunate enough to make the Grand Tour of Europe. Not only did he study in Paris, London, and Vienna, but he also observed the clinics in Berlin, Christiana (Oslo), and Constantinople. In Vienna, Duhring was particularly impressed with the teachings of Ferdinand von Hebra (1816-1880) and his son-in-law, Moritz Kaposi (1837-1902). These travels would subsequently be recorded in letters to the Philadelphia Medical Times. [3]

Career
In 1870, Duhring returned to Philadelphia where he opened his private practice of dermatology. American medicine did not admire specialization for another few decades, but Duhring quickly earned an enviable reputation. He also established the Dispensary for Skin Diseases, an outpatient facility that in 1890 Jefferson Medical College Hospital would absorb.

Also in 1870, he started the Photographic Review of Medicine and Surgery with Francis Fontaine Maury (1840-1879), a surgeon at Jefferson.[4] Unfortunately, this amazing periodical with fascinating pictures only lasted through two volumes[5]

Duhring was a keen observer and can be credited with describing pruritus hiemalis and seborrhea corporis, both in 1874. A decade later, he would elucidate the concept of dermatitis herpetiformis, sometimes called Duhring’s disease. [6, 7]

He became the first professor of dermatology in the University of Pennsylvania School of Medicine in 1876, spending his career at his alma mater.

1876 also marked the centennial of the founding of the United States of America, and the Centennial Exhibition was organized in Philadelphia. During the sessions of the American Medical Association and later the International Medical Congress, Duhring, along with several other prominent dermatologists, organized the American Dermatological Association, the first national dermatology society in the world. He would serve as vice-president and later president of this prestigious organization.

Duhring was both a scholar and prolific writer, which helped to establish his international reputation. In addition to publishing papers in various journals, he wrote An Atlas of Skin Diseases (1876)[8] that contained remarkable illustrations. In the next year, his famous text appeared, A Practical Treatise on Diseases of the Skin.[9] So well received was this book that it went through several American editions[10-12] and four foreign translations.[13-16]

His student manual of 1885, entitled: Epitome of Diseases of the Skin, was based upon his lectures at Penn. [17] What would have been his monumental work Cutaneous Medicine was abruptly stopped after the disastrous fire at his publisher the J. B. Lippincott Company in 1898. Two of the five volume had been published, and the fire took the manuscript for the others[18]

Legacy
His estate was enormous, even for the era, and provided a distribution in excess of $1,600,000 to several institutions and family members (He had never married). The College of Physicians of Philadelphia benefited from a bequest that permitted it to develop the largest dermatology collection in the world. The University of Pennsylvania received monies for maintaining his wax model collection and the colored illustrations of skin diseases, as well as for purchasing books, supporting free dermatology beds in the Hospital of the University of Pennsylvania, and funding the University Museum, which had been establishing its Egyptology collection. The University memorialized Duhring with the Duhring Stacks at the then Main Library and the Duhring Laboratories (no longer extant) in the Department of Dermatology. (Figure 7)