The Oxford English Dictionary lists the 3rd meaning of luminary as « a source of intellectual, moral or spiritual light; a person of ‘light and leading’ ».

I would like to propose to you that there may be many components beside dermatology that can exist in a dermatological luminary.

This was particularly so in the early formation days of dermatology. Dr. Francis John Shepherd is a good example. 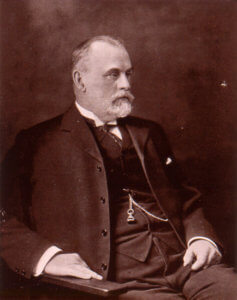 In the 1890’s anatomy was taught in the first two years of medical school. I doubt any of us remember how much time was spent on anatomy. Five days a week Shepherd gave a one-hour lecture from 9-10, then he and the students went to the dissecting room for two hours. The students might then go back for another two hour dissecting room session from 4 till 6 or from 8-10 at night. Twenty-five hours a week on anatomy! Shepherd directed this extensive teaching for 30 years. He wrote 21 papers on anatomical subjects. In his reminiscences Shepherd says that in the early 1880’s McGill was paying body snatchers between « 30 to 50 dollars » per corpse.

General surgery in the 1880’s and 1890’s was still primitive by our standards. Primitive diagnostic techniques, primitive ether or chloroform anesthesia, primitive antisepses (Lister’s techniques were first used in the Montreal General Hospital in 1877). He wrote 78 papers on surgical conditions of the thyroid, tongue, kidney and abdomen.

The minutes of the Faculty of Medicine at McGill University record that from 1900 to 1914 Shepherd was one of the senior professors on the executive of the Faculty of Medicine. At one time or other he served on all five of the faculty’s standing committees – finance, education, building, library and museum. When he was dean at McGill from 1908-1914 he was ex-officio member of all five standing committees, as well as attending monthly faculty meetings and representing the faculty at other events.

Shepherd in the 1870’s attended at the Stamford Street clinic of Jonathan Hutchinson, who was assisted by Warren Tay. He attributed this event as stimulating his interest in dermatology and he started a weekly dermatology clinic in 1880 in Montreal. He pushed for dermatology to be listed in the curriculum of the McGill Medical Faculty. This was done in 1907. Shepherd was the Professor of dermatology from 1908-1914. His 14 dermatology papers are a mixed bag; e.g. there are 3 on drug reactions, 2 on blastomycosis and such other conditions as ainhum, lichen scofulosorum, feigned eruptions, and eruptions following abdominal operations. He must have had considerable contacts with dermatologists in the United States as he was voted into the American Dermatological Association in 1888 and became its president in 1900. He was the second Canadian to do so, the first being Joseph Elliot Graham in 1888.

He subsequently became an Honorary Member of the ADA. In 1907 he was a Vice President of the International congress of Dermatology when it was held in New York.

For 42 years Shepherd spent much time and effort and money supporting the Montreal Art Association which later became the Montreal Museum of Fine Arts. From 1910 to 1919 he was the chairman of the Board of Trustees of the National Gallery of Canada.

Among his special honours were honorary Doctor of Laws from Harvard, McGill and Queen’s. Shepherd, as we have seen, was not a full-time dermatologist. In fact, as Dr. Cleveland an early Canadian dermatologist reported, « his dermatological philosophy was utilitarian and pragmatic ».

All in all he was really quite a remarkable man.

I suggest to you that even today many dermatology luminaries have interests and abilities and knowledge beyond dermatology. In other words, they also are well rounded, perceptive and contributing human beings.