Robert Jackson, M.D
Dr. Robert Jackson, MD, FRCP, is a Senior Dermatologist, Ottawa Civic Hospital
he is Emeritus Professor of Medicine (Dermatology) at the University of Ottawa, Canada
You may write to Dr. Jackson at robertj@istar.ca

This text is based on a presentation made at the Canadian Dermatology Association meeting held in Montreal in June 1977.

While preparing material for the history of classification of skin diseases (1) for the 25th International Congress of the History of Medicine held in Quebec City in August 1976, I came across an interesting problem. Alibertés (1768-1837) classification (2) was very artificial and confusing, and was only of value in showing how not to classify skin diseases.

Alibertés classification of the dermatoses in twelve classes, which appear as twelve branches on his Tree of the Dermatoses

Thomas Bateman was particularly vitriolic in his criticism of it.

What intrigued me was that Alibert had likened his classification to a tree, and in fact called it Arbre des Dermatoses. An imaginary tree was drawn, and on branches was his classification. Beneath the lime trees of l’Hôpital St. Louis in Paris he is said to have lectured to his students,using this tree as a teaching aid.

Well, I had to see this tree. 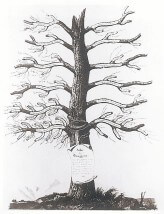 I knew what was on the branches, because I had detailed reports and analyses of his classification. The only thing I needed was a larger and clearer photograph to read what was on the plaque on the trunk.

I appealed to one of our members* for help. Dr. Georges Leclerc of Montreal sent me a larger photograph of Alibertés tree from a 1936 French dermatology text. Lo and behold, it was a differently shaped tree! 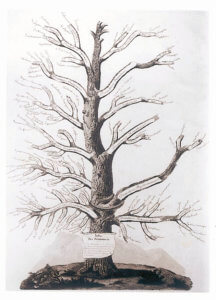 So now I had two trees; which one was authentic?
I wrote to Ruth Mann, Medical History Librarian at the Mayo Clinic, and to l’Hôpital St. Louis in Paris. It turns out that the tree depicted in the English literature was from Alibertés 1832 text, Monographie des Dermatoses ou Précis Théorique et Pratique des Maladies de la Peau (2). The second tree, depicted in the French literature, was from an 1833 atlas of Alibert entitled Clinique de l’Hôpital Saint Louis, ou Traité complet des maladies de la Peau, contenant la description de ces maladies et leurs meilleurs modes de traitement (6). So I had my answer : one tree was from a publication dated 1833 and the other tree was from a publication dated 1832. Who drew these trees, and why a new one was prepared for the second publication is the subject of another search.

But I am not done.

As some of you may know, in my spare time I do a fair amount of needlepoint. Also as some of you may know, I am a nut on terminology and the morphological classification of skin diseases. So what could be more natural than for me to take Alibertés tree and make a needlepoint of it, and incorporate on it my classification of skin diseases. I used the 1833 version because it was more aesthetically pleasing to the eye.

This is the result : 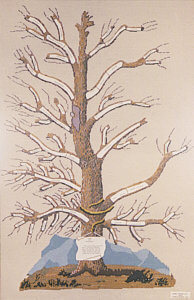 Maybe one day in Ottawa I will be found lecturing to my residents outside the Ottawa Civic Hospital on the proper classification of skin diseases, using my adaptation of Alibertés tree. We don’t have any lime trees, but there are three gingkos which would provide some shade and a nice background.

P.S. The inscription on the plaque on the trunk of both of Alibertés trees reads as follows :