The study of the differents articles, thesis, and books about Pierre FAUCHARD, who was born in the seventeenth century and who deceased in 1761, don’t allowed to know anythink neither about his familial origines, nor about his childhood, nor his studies, nor his skills. Numerous and moreless serious researches have been made, ( with the radioesthesy for exemple), and there is still unknowed elements in the knowledge about the great man Pierre FAUCHARD who sometimes nicknamed the Hypocrate of the dentistry.

Because i was keen on knowing better this physician, because i noticed some written mistakes that were copied in the literature and above all, because of my taking part in the Europeen Group of research about dental surgery from the eigtheen century, i was induce to study the biographical elements concerning Pierre Fauchard and very eager to complete or correct the information that we already know.

Details about the origin of the Fauchard’s family

To day, the only sources of informations about it, is the book writen by himself, called  » The Dental Surgeon, or treaty about teeth « , in his three publishing.

There is no track about the name of Pierre FAUCHARD :

Consequently the recherches dealt in the triangle form by the three towns RENNES, NANTES and ANGERS, were Pierre FAUCHARD started his activity.  »  I was asked « ,  » I was there « , and late in 1715,  » Mr de ROMATET came home  » etc…

Reading all the registres of mariages acts allowed us to spot precisely the only principal birthplace of the FAUCHARD family in the midst of this triangle, in the valley of SEICHE , which is an affluent of the river VILAINE, which run through RENNES.

A first census of all the FAUCHARD families in the 18 century has been made. It’s concern 23 towns. All theses places, towns, and villages are in BRITANY. 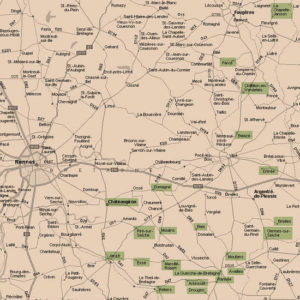 We have proceeded in a genealogical steady work of these families in the seventeen century ; then there were only four registers mentionning the name of Pierre FAUCHARD, in a radius of seven kilometres. The FAUCHARD family birthplace is situated in a breton contryside.

The first knowed weddind is that of Jean FAUCHARD and Jeanne TRUBLET in 1603, witch could be the great grand parents ? Some documents are not avalaible , because they are in bad state, will be microfilmed and exploited in the years to come. They allowed to go on with the research. 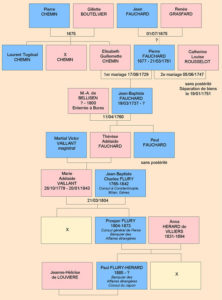 Pierre FAUCHARD died on 21 march 1761 in PARIS, rue des Cordeliers, accord to the parish act of St COME ans St DAMIEN in PARIS.  » The 21 of march sieur Pierre FAUCHARD corpse was buried in the blessed sacrament nave. He was master dental surgeon dentist , sir of GRANDMESNIL and husband of Louise ROUSSELOT , he deceded, the day before yesterday , the age of 83, rue des cordeliers, of this parish « . 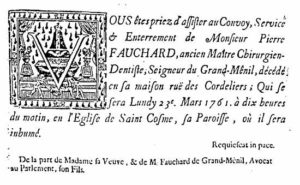 Consequently there is a probability of 297 to 79 ( 8 chances out of ten) for the date of birth to be 1677 and not 1678 ; contrary to watch the stamp, witch came of for his bicentenary indicated for exemple.

Pierre FAUCHARD is supposed to be born in an area of the south of RENNES, at the limit of the departement of the MAYENNE, where the spoken language has a typical and very strong accent. The voyels é, è ê have been replaced by the phonème  » eu  » (for exemple  »  je suis allé au marché  » became  » je suis alleu au marcheu « , and the use of the tenses at the past simple , very frequent in the common conversation , is very supprising. The language has of course involve in 200 use time ; Pierre FAUCHARD is likely to have had a caracterised countryside accent hanged on his lips like earth hanged to his clogs in his childhood and in his beginning.

Was he embarrassed about it to make a carrier in the capital city ?

Anywhere he never spoke about his origine and this is perhaps the mystery of Pierre FAUCHARD.

About the name of FAUCHARD DE GRANDMESNIL 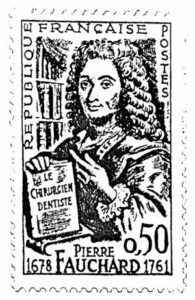 In august 1734, Pierre FAUCHARD brought the castle of GRANDMESNIL. It was a castle bilt on a mansion lord domaine situated at BURES sur YVETTE, in the west of PARIS. The history of this fief of GRANDMESNIL is precisely related in the book from Jules LAIR, called  »  history of the lord domaine of BURES « . The castle of GRANDMESNIL was bilt before 1383 ; at this date, it was only a lord-house with a dove-cote, a barn, a presshouse, and 30 acres. Numerous owners who belong to the clergy of the noble court followed one another. One of those, Pierre de VALLES, who was a war administrator and the king adviser, was the first one to be name  » sieur de GRANDMESNIL « . This is the title that Pierre FAUCHARD will take when he become the castle owner.

Pierre FAUCHARD was not anoblisched by LOUIS XIV ; he just added at his name that nobiliary particule. It does’nt give an anoblischement, but the apparence of it, and many Pierre FAUCHARD’s biographes were trapped in it.

When buying castle which has had so many prestigious owners, Pierre FAUCHARD brought himself a name  »  Lord of GRANDMESNIL  » and he fulfilled his social ambition this way, as well as his intellectual ambition. It is human to understand he had never mention his modest origin. This is also part of Pierre FAUCHARD mystery.

It is only in 1919 that the castle of GRANDMESNIL leave the FAUCHARD’s family, sold by his great great great grand mother Jeanne de LOUVIERE, to a bank family : les FOULD.

About Pierre FAUCHARD professionnal studies and the beginning of his activities

Pierre FAUCHARD has worked for more than 50 years as a dental surgeon. We have considered the studies and the activities of more than one hundred dentists and dental surgeons in the eighteen century, that is to say every persons working regulary, either he had a diplôme or not. The sources of informations are the directories;  the almanacs, and the newpapers.

We have noticed that nearly all the physicians whatever their studies, seld remedies, and does like many others. For exemple the advertising in the MERCURE DE France in 1735.  »  he sold a weird water whore vertu is sovereign against the simptomes of scurvy of the gums. 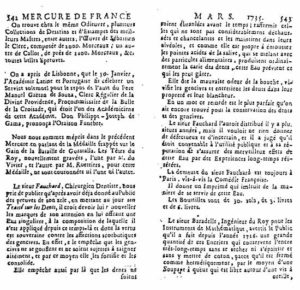 Some dentists despite there were master of surgery and has sometime written book have an itinerant exercice. This is the case of GARIOT, in RENNES , TOULOUSE. Pierre FAUCHARD certainly work in RENNES in 1713, since he has written in his book. He could have been received by the community of the masters in surgery in RENNES, but it’s not the case, because we would have had tracks in the registers of the community. He could have rent a room, but, but ther is no tracks of the pol tax roll. It is thus possible to think that Pierre FAUCHARD was an itinerant workers like many others. Either by settling in somebody house such as BEAUSOLEIL, DE MUNAULT, MOREL, GONDRAIN, in RENNES, or in settling in a hotelto work for 15 days or three weeks like CUVILLIER or GARIOT , in RENNES.

Nevertheless we think that his work became sedentary in 1715 in ANGERS, when he write :  » Monsieur de ROMATET vint chez moi « .

The master in surgery who has trained Pierre FAUCHARD is names Alexandre POTELERELET, major surgeon in the King’s vessels.

There were in the docks, particulary in NANTES, masters in surgery, surgeons of the King and of the navy, sometime major surgeon, that worked on their profession, taught, and dealt with the examens of the surgeons on board.