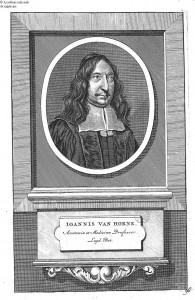 In 1656, in Amsterdam, Rembrandt painted his second Anatomy lesson. At the same time, in Leiden, in the Netherlands Golden Age that was brimming with artistic and scientific innovations, anatomy professor Johannes Van Horne and artist Marten Sagemolen were working on an unprecedented anatomical atlas of the muscles in color. Although it remained unpublished, the European intelligentsia celebrated this work. Then, strangely enough, these drawings fell into oblivion in the course of the 18th century.

Four large volumes comprising 251 drawings, systematically organized in several series and constituting a large part of this anatomical atlas, have just been identified in the collection of the BIU Santé (Health Inter-University Library).

The Library is now unveiling this jewel, which should be of major interest to both historians of medicine and sciences and historians of art. 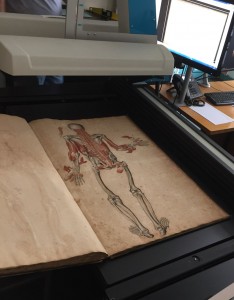 Identification was made by Hans Buijs (Fondation Custodia, Paris) on Friday, June 17, 2016. One single sentence found in the margin of a drawing dated 1654 revealed the name of the artist, but also, with absolute certainty, that of his patron, as well as important pieces of information on the constitution of the collection.

The very same sentence is indeed featured in the notes of famous physician Herman Boerhaave (1668-1738), one of the former owners of these volumes. Tim Huisman, in his doctoral dissertation in 2008, The Finger of God, Anatomical Practice in 17th-Century Leiden (Leiden University, 2008. p. 73 sq), published and documented these fragments. After examination of the four manuscripts under this bright new light, there can be no doubt whatsoever on their identity.

We publish an article that establishes the authenticity of the documents, gives part of their history, and provides an inventory of the four volumes. The article is subject to modifications: potential corrected versions will be available from the present column, at the same address.

We also publish first-step digitizations (please see the links below). They will allow researchers and the general public to have immediate access to these documents, which are quite fragile, very dirty in places, and require considerable restoration work.

Most of this monumental ensemble is at a scale of 1:2: the drawings of the human figure, from head to toes, are 83 cm high. This very unusual scale accounts for the large format of the drawings.

Quite remarkably, the authors chose to represent a live man leaning on a graduated measuring rod, which indicates the importance they attributed to the accuracy of measurements in their work.

These documents are of amazing richness: the originality and the ambition of the whole project, the – probably original – organization of the volumes, the large number of drawings, the multiple notes, the traces of the artist’s technical work and the history of the provenance – foreshadow particularly interesting and productive research.

Since at least 1784, Van Horne and Sagemolen’s myology has been next to another set of the 17th century Dutch anatomy, the 106 brilliant drawings painter Gérard de Lairesse produced for Bidloo (1685), who was also a professor of anatomy in Leiden. This famous set cast a dark shadow on the set now re(dis)covered, dissimulating its interest since the third quarter of the 18th century. The series of original drawings by Lairesse, which, as the drawings by Van Horne and Sagemolen, has been part of the collection of our library since March 1796, is available online in our digitized library Medic@.

Over the last few months, we have been digitizing all the drawings in our collection. This work triggered this partly serendipitous discovery. The Preparatory drawings for the Traité complet de l’anatomie de l’Homme by J.-M. Bourgery, another set of major importance for the history of anatomical illustration, can already be consulted online in Medic@.

Une réflexion sur « After 270 years of oblivion, Van Horne’s atlas of anatomy, a jewel of the 17th century, has been rediscovered »